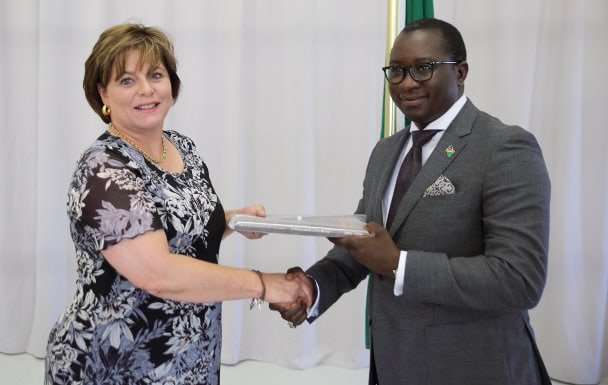 Director handing over the Commemorative Book to the Minister of Justice, Hon Shanghala 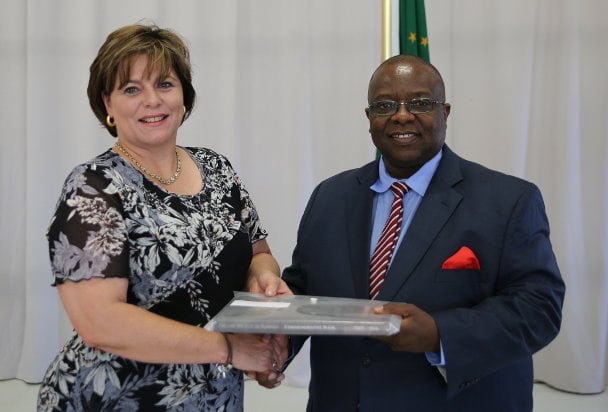 Director handing over the Commermorative Book to the Deputy Chief Justice, Hon Damaseb 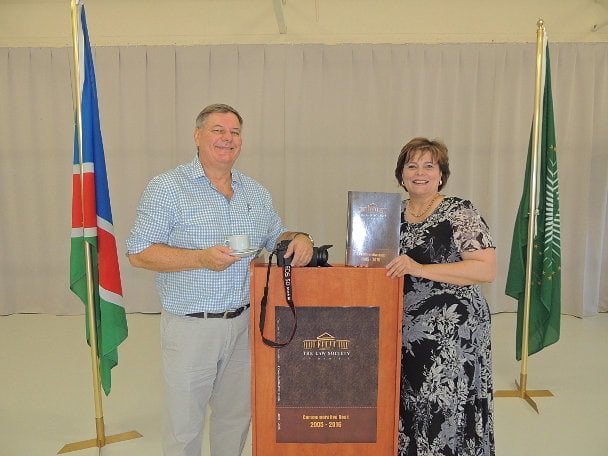 Today is probably the busiest day in the business calendar of the whole of Windhoek.

Many legal practitioners and invited guest indicated that they would have loved to be here today but could not attend due to other engagements.

We are, however, extremely pleased to welcome all of you to this long awaited launch of the commemorative book.

CEOs and Directors of law societies and bar associations have a unique perspective. Not only must they provide continuity and high quality advice on policy matters to the elected leaders of their professional bodies, they must also practically, effectively and efficiently manage their organizations in the best interests of our members and the public.

The Director has been at the LSN for 21 years. During this time and under her ‘leadership’ the LSN has published a 85th Anniversary Commemorative Book, two yearbooks and now the LSN Commemorative Book 2005 – 2016.

She has been instrumental, with the assistance of the Editor, Gys Reitz, to compile the Commemorative Book, capturing the history, challenges and achievements of the LSN.

She is a member of the International Institute of Law Association Chief Executives (pronounced “eye-lace”) since 2002. Until recently she served as its Vice Chairperson, who is the Chairperson-elect, a position she would have assumed only in October 2018.  This happened sooner as the current President left his position at the German Bar Association and she took over as President of IILACE from 1 February 2018.

Both the Commemorative Book and her Presidency is something to be proud of.

It is my pleasure to invite Retha Steinmann to the podium.

My history with the LSN started when I commenced employment at the Law Society, on 1 February 1997.

I did not have a job description and I was not admitted as a legal practitioner yet.

My previous work experience as a Prosecutor, Magistrate and Legal Advisor could not prepare me fully for the work at the society. With time came knowledge, a job description, insight and hopefully wisdom.

My relationship with the Society was further cemented when I was admitted as a legal practitioner on 11 September 2006.

During the past 21 years, I have mostly enjoyed my work, despite legal confrontations with members and non-members alike.

And I have realized that regulators are mostly unpopular.

Legal professional bodies are complex organizations and we face complex challenges and need all the help we can get.

IILACE was established in 1998 as a network to bring CEOs and Directors of law societies worldwide together to provide a focused forum to share common interests and ideas, exchange views and information, to discuss challenges and learn more from each other’s insights and experiences on a local, national and international level.

The support of my Councils and staff over the years, my membership of the International Institute of Law Association Chief Executives (IILACE), but mostly the fact that I had job satisfaction, kept me grounded and content over the years.

As the Director of the Law Society of Namibia, but also as a member of this august organisation, I have a vested interest to see it prosper, grow and transform.

From the Law Society’s side, and in my capacity as Director, I am the person responsible for this book due to my institutional knowledge and the fact that I am the custodian of the information and photographs.

Some of you will know that I am seldom, at a function, without a camera trying to capture the moment and the people.

This eventually created a comprehensive visual archive of all the activities conducted under the banner of the Law Society of Namibia.

Something had to be done with all the information and photographs acquired over the years, otherwise it would have been like my cellular phone in my handbag – I know it is somewhere but cannot find it - and what better way than to capture it in a formal publication.

A 85th Anniversary Commemorative Book was launched in 2006, capturing the history of the LSN since 1921, with specific emphasis on the period 1995, when the Legal Practitioners Act came into operation, until 2006.

As a follow-up, we published yearbooks for November 2012 – October 2013 and November 2013 – November 2014. This was however not sustainable due to the amount of work and effort that had to go into the compilation and lack of funding and human resources.

When we compiled the first Commemorative Book I remember that we still used a lot of printed photograph, which had to be scanned and we struggled with quality for publication.

With this project photographs were in abundance and if you page thought the book you will see what I mean.

When the project started, neither the compilers nor the Editor realised to what extent the final publication would grow from 224 pages to 300 pages – to comprehensively record all the activities of the past 11 years, photograph events and obtain recent photographs of our legal practitioners admitted up to November 2016. Together with the 85th Anniversary Commemorative Book we have a compendium of information relating to the legal profession and the LSN.

The book is divided into chapters derived from the various Chairpersons’ Reports. These provide summaries of the highlights, achievements and challenges of each year. The book also contains photographs of our members who were elevated to the bench during this period, our members who passed away and information on bursary recipients and individual membership photographs.

Where available we have tried to include as many photographs as possible. These images depict the legal fraternity as a real society, the camaraderie between members and the pleasant exchanges during engagements.

Bringing all the material together took up a lot of hours, for me especially after hours and over weekends.

And we experienced difficulty to obtain photographs of our members who are no longer in the country.

Many of our members made a huge effort to submit good quality professional photographs, featured from page 271. These are complemented by the photographs taken by the Editor and I.

The names of those legal practitioners, of whom no pictures were received or whose pictures were of an insufficient quality, could only be listed.

The information in the book is based on events up to the AGM in November 2016. Therefore, the cut-off date for admission as legal practitioners, and included in this book, also had to be the same date.

We have tried to keep it informal and therefore used first names for our members and those we work with us on a regular basis. Where required, we used their official titles.

More pages increased the project budget. New quotations had to be obtained for the printing of at least 1100 books for distribution to all legal practitioners (799 and growing) as well as to stakeholders, advertisers and sponsors.

To cover additional costs and to comply with our undertaking, we approached more advertisers, as well as individuals.

There will be a vote of thanks later but I wish to thank everybody who assisted me in this project, but I must especially thank my husband and my family for their patience and support.

I worked with Gys Reitz of Parrot Communications on the 2014-year book. I appreciated his work ethic, his patience and his professionalism. When the concept of a follow-up Commemorative Book was first mooted, he was the natural choice for Editor.

Gys Reitz had the yearly reports of the Chairperson as the basis to work from and thousands of photographs. He managed to capture the essence, relevance and significance of the event in an accurate and pleasant combination of photographs and text.

If we had made mistakes, please forgive us and do not sue use.

This relationship was tested from time to time, especially when we set targets and deadlines and I could not manage to meet it, even in my free time, due to the workload and pertinent matters that had to receive my attention at the LSN.

This added to the reasons why the book could not be published earlier.

Gys was understanding during these periods and he humoured me when the pages of the book increased to 300 pages.

The book was ready for printing in December 2017, but stood over due to the closing of the printers for the festive period. In January, after having issued fidelity fund certificates to the firms, I realized that some of the details of the firms, who advertised in the book, changed and we regarded it prudent to allow time for the changes to be made. Gys also helped where he could to finalise this process.

I have mixed feelings about the book – on the one hand I am delighted, not just that it is finished, but at how splendid it turned out.

On the other hand I am doubting my memory. I must admit that I have totally forgotten the hard work that went into the 85th Anniversary Book until we started compiling the Commemorative Book 2005 to 2016.

If my memory served me better (and if I was my mother’s smartest child, which apparently I am not), this publication may have remained merely and idea on the drawing board.

If I am ever sufficiently deranged to compile another book, I would want somebody like Gys on my team.

I thank Gys for what he has done and ask that he be given a round of applause.

It brought me immense joy to capture the history of the LSN.

Near the project’s conclusion I again realised the importance for the fraternity to know where we came from and where we are going as an organisation.

It is therefor my distinct honour to officially launch the Commemorative Book 2005 – 2016 by personally handing out copies to the:

I thank you for your attendance.