The Law Society’s involvement with the Judge JP Karuaihe Trust started during 2006 when the trustees of the JPK Trust approached the LSN to assist them in identifying and selecting deserving winners for the ‘legal excellence awards’ thereby acknowledging the dedication, efforts and commitment of legal practitioners who are enhancing and protecting the Rule of Law in Namibia and honouring their social responsibilities.

The LSN received the names of the best students from the Justice Training Centre and University of Namibia, respectively.
Many of the LSN members contribute to society but they do not always ‘advertise’ their good deeds. The LSN thanks them for their contributions to society and trust that the good deeds will continue in future.
The LSN invited nominations from its members. The Access to the Law and Social Responsibility Committee considered:
The Committee made recommendations to the Council with regard to the Excellence Awards for Social Responsibility and Human Rights.

We thank the JPK Trust for joining hands with us to honour achievements.

Vicky ya Toivo, on behalf of the JPK Trust, received the sponsor cheque from At Slabber, Director at Dr Weder, Kauta & Hoveka

Vicky ya Toivo, on behalf of the JPK Trust, presented Sune with the trophy.

Vicky ya Toivo, on behalf of the JPK Trust, presented Nicole with the trophy.

Kandali Nuugwedha, on behalf of the UNAM Legal Aid Clinic, received the award from Vicky ya Toivo.

The winner is: Legal Assistance Centre.

Toni Hancox, on behalf of the Legal Assistance Centre, received the award from Vicky ya Toivo.

This year the JPK Trust further acknowledged two firms who made contributions to Society. These firms are Ellis, Shilengudwa Inc. and Chris Mayumbelo & Co.

Karin Klazen, on behalf of Ellis, Shilengudwa Inc. (ESI), received the certificate from Vicky ya Toivo.

The LSN congratulates the JPK Trust with its 16th Anniversary and wishes the JPK Trust much success with their future endeavours. The LSN trusts that their commitment to providing bursaries to deserving candidates to study law and honouring achievements will go from strength to strength and that the LSN and the JPK Trust will have a long and fruitful relationship.

The LSN’s involvement with the UNAM Legal Aid Clinic

The UNAM Legal Aid Clinic was launched in August 2004 in the boardroom of the Law Society of Namibia.

It was mentioned at the launch that the clinic would be run by the staff of the UNAM Law Faculty under the supervision of lecturers, assisted by legal practitioners who volunteer their services or who are assigned by the Law Society on a pro bono basis.

The wish was then also expressed that the partnership between the Law Faculty and the Law Society of Namibia would lay the foundation for further cooperation in the field of practical legal studies.

The Namibian Legal Practitioners Trust (NLPT) has, since inception of the UNAM Legal Aid Clinic, been paying the rental of the premises in Katutura and lately is also paying the salary of the administrative staff member at the clinic, via the LSN.

Nolan Swarts, on behalf of the LSN, presented Yvonne Dausab with a photo book reflecting the events of the UNAM Legal Aid Clinic that the LSN Director attended over the years. 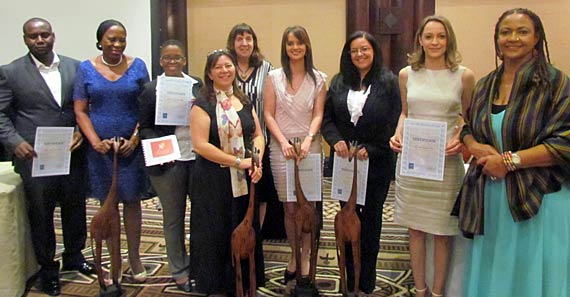